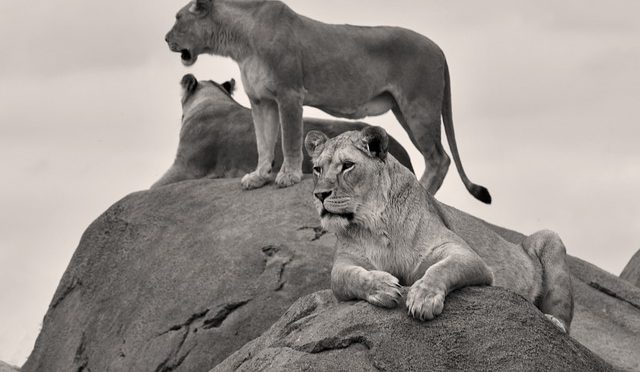 What an incredible beauty, where we can immerse our senses, when watching the new Disney version of the Lion King. Real landscapes, real animals in a beautiful world, this is what we see at the beginning. But is this really possible? Can you really film these scenes with real animals?

Never mind this question, I don’t really need an answer, I just got caught in the loveliness of all, the mighty King and his wise words, the inconsciously audacious child – which reminded me of my own life when I believed to be more adult than I was -, the infantile love story of the lion cubs and the feminist ideas of the girl not to ever marry the boy. All these everyday, normal and often silly attitudes of humans represented by the intriguingly lovely lions.

The hero’s and the heroine’s journey

And yes, also like in real life, there is something going on beneath the beautiful surface. Unrecognised by those who believe in the goodness of all creatures – and who choose not to take alarming signs seriously – the evil forces develop and plan their takeover by enslaving and killing those who are in their way, threatening the whole tribe in every possible way in order to force them into submission.

Here is where the hero’s – and heroine’s – journey starts: Who will give in to the threats of the powerful and who will not? The Lion Queen does not succumb to the evil manipulations of Sherpa, the brother and murderer of the King, neither to the threat by the hyenes controlling the territory. She is wisely waiting for the right moment. However, the young female, Naia, who once, as a cub, had played with Simba, risks escape in order to look for support in fighting against the total annihilation of the tribe and its territory.

The need to take on responsibility to push against evil

The evil new king, Scar, who killed his wise and caring brother, was sure to have destroyed the baby prince, the promised king. He had relied on the report of the hyenas in charge, not realising that those are as evil and corrupt as he himself. So Simba survived and was adopted by other creatures where he lived in safety, beauty and pleasure – until Naia found him and reminded him of his sacred duty to take on his vocation as the king of their tribe, to become a responsible adult.

Why should anyone give up the easy and pleasant life, even if it is not meant for them? A lion who eats insects instead of going out hunting? A young adult who believes to have the right to idle around and follow the impulse of immediate pleasure in a surrounding where everything is provided for him? Now he experiences even  love, love for Naia with whom he had played in early childhood. He wants her to share his life of unending pleasure. But Naia is an adult and she knows about the shadowy side of life, the suppression and devastation of her tribe and homeland. She cannot accept, despite her love for Simba, to pretend that the real life out there is not happening and she chooses to leave the young man.

The role of the female: invite the male into adulthood

The archetypical power of the female over the male. It asks a lot of the female in being honest and in renouncing her personal happiness. But this is the only way to push the male out of his bohemian lethargy, to enable him to step up into adulthood and take on the task which is waiting for him. And so Simba, finally, joins Naia and returns home and confronts the evil uncle Scar who is playing all the possible cards he still has.

When Scar had come across Simba in despair near the corpse of his father, he had insinuated, that he, the little cub, had caused the death of his father The child had taken on the guilt, albeit not understanding. Scar ordered him never to talk about their conversation. Grown up he had forgotten all about it, but in the decisive moment of the final battle, the evil uncle reminded him of his “guilt”. This recognition weakened the strong Lion to the point that the evil uncle almost succeeded killing him in the same way as he did with his father.  But he reveals himself as the murderer, in his malevolent exposition of triumph.

This is the moment when the mighty righteous male taps into his utmost power and  the female becomes an atrocious warrior.

Betrayed mercy calls on the ultimate forces of destiny

Together they fight the evil forces, maintaining their dignity of not paying back Scar with the same cruelty he had used himself. Simba doesn’t kill him, but gives him the chance to live and to repent – and Scar, with the utmost  evil is using this gesture of compassion again to destroy and kill, fortunately without the desired outcome. At the end the creature is killed and eaten by the hyenas which he had used and abused for his evil purposes and who don’t believe him any longer.

What do we learn from this story?

The hero and the heroine have come back after life threatening experiences to defend the good and weaken the bad. They take over the place which is meant for them: being good leaders in the service of life and the community, in good relations with all other beings around.

The archetypical universal story lives on in us

It is a very old story, told  for centuries and everywhere all over the world in different forms. It is exposing the human existence embedded in the dichotomy of “good” and “bad”, of virtue and evil. The stories are told through personification of these human qualities. This way it is easy to realise who is the good and noble one and who embodies all evil. Whoever hears these stories feels a bell ringing inside, they are part of the collective unconscious. We know what they mean even if we, ourselves haven’t lived consciously any similar situation. The knowledge is in our bones -or with contemporary words: in the Akashic Field – and we understand the symbols perfectly and can relate them to our own lives.

If we are courageous enough we can also realise that both these polarities are present in our own hearts: we are Simba and Scar at the same time, we are able to be and do both ways. We are asked to reconcile these forces in us, encouraging the good, understanding and defending against the evil without wanting to kill it. When we succeed to not indulge in revenge, the evil will be destroyed by its own doing.

What can we learn from this beautifully made film? First of all we need to ask. Why does it touch me?  What is it, that I recognise as true? Why is it that I can apprehend the future delusion when the young cub overestimates totally his understanding and his abilities? Why am I so touched when the two cubs meet again as adults? Is it just a silly story about animals or is it a metaphor for us humans, for you and me, after all? And the final question: where am I on my journey right now? And where do I still need to go to truly become an adult human being?