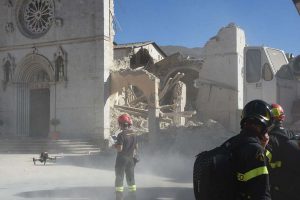 The article was written on August 25th, 2016 – the day after the 1st devastating earthquake in Italy.

(In the meantime others have happened and the censoring is going on, more than ever.)

At the moment it’s the OTHERS who die, not the ones who earn by fracking, pulling out with violence what is hosted inside of Mother Earth, but their turn will come before they even understand what they are doing.

I just saw a map of fracking activities all over the place, and yes, also in Italy. And a guy is monitoring for years that earthquakes arise exactly there and build up to bigger ones, even across continents.

Yes, I know,earthquakes have always happened, but what we are doing now is accelerating their appearance and increase their power – until we might see old volcanos fire again as a result of the pressure which is created and certainly significantly increased by human actions.

Why are we doing all this? Someone earns a lot of money – and we pay it because we want to drive cars and go by airplanes. But we wouldn’t need the OIL for enjoying the luxury of our present life, we KNOW THAT FOR A LONG TIME – ENERGY CAN BE PRODUCED WITHOUT OIL EXTRACTION. Some people dedicate their lives to explore alternative ways – and our societies are still sleeping or half-heartedly doing just a little bit.

Nobody wants to take on the confrontation with the current economic powers. And it is THEM we need to attribute the cost of the devastation of our Earth, our landscapes and soils, even our houses and the air we breathe.

A huge part of what is happening is man-made – for the greed of a few who are not even aware of the damage they are creating, also because it is rarely them who pay for it, but the small people who, as in the case of an earthquake, are pushed into poverty and life- changing upheaval.

Watch this video: https://www.youtube.com/watch?v=0JTRgs4l740. It shows that the earthquake was predicted to happen in that very zone in those days. But official science still denies that they can be predictable at all. If it had been communicated sufficiently, people living in that zone would have had the choice to spend a few nights with friends or family in a different zone of Italy, or even sleep in their cars where they couldn’t be hit by tumbling walls.

SO MANY PEOPLE COULD STILL BE ALIVE – if the information wouldn’t be suppressed and ignored. Is this the world YOU want to live in? REALLY?

So what will YOU do to change this?

PS: I am following the earthquake forecasts since that day and was alert of the others which came to Italy at the end of October.

“Don’t be scared, be prepared”– that’s all we need to save our individual lives, here and now. But the dangers created by the unethical use of technology is mainly unknown to the people. It’s not only fracking, many more highly destructive procedures which sooner (not later) will destruct the earth. We are already eating up 1.5 of our planet. Visit Dr.Robin Wood’s website thriveability.zone/ and the conversation with him at the Wisdom Factory https://www.youtube.com/watch?v=sq0qK1KUeV4 and  https://www.youtube.com/watch?v=wLKZlXum-sg