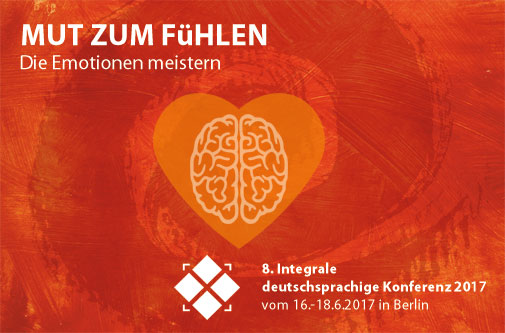 You might think that you don’t need courage to feel, that “feeling” is something natural and you just feel what you feel. Well, yes and no. Most of us are longing to feel joy and happiness and run away into distractions of all kinds as soon as unwanted feelings present themselves. Alcohol is a means of eradicating negative feelings and, as we all know, our societies drink a lot. Doesn’t that mean that we don’t want to meet our negative feelings? That we don’t have the courage to face them, directly, and find out what they want to tell us?

During the last weekend, I attended a conference about the “Courage to Feel” in Berlin and we addressed those feelings which are buried in the shadow of our country, those feelings which we try to avoid and which we fear to feel. Beginning at the personal level it turns out that newbies have a hard time to just look right into the eyes of another person for a few minutes. What comes up often is awkwardness, fear, shame and all sorts of thoughts which want to convince us to turn away our eyes. We fear the intimacy which arises when we REALLY look closely and attentively at something for a certain period of time. And we fear the feeling of intimacy with a person we have never seen before.

The  exercises we did were all about becoming conscious of what is going on inside, the feelings and the thoughts around them, and to bring all that into the context of us and our nation, Germany, which is confronted with the huge challenge of taking over leadership in the world again while still carrying the shadows of the past. We are aware that POWER WITHOUT LOVE leads to violence. We are also aware that our nation holds power and has a huge conflict with that fact. And we are aware that we need to heal the past in order to avoid a repetition of history.

Germany has recognized the guilt for what it has caused in the 20th century, but we Germans, collectively, have not yet transformed the guilt into the power of positive change. We haven’t integrated our shadows and made available the positive force which appears when completing this process. The true liberation from guilt and shame, which is still haunting us up to the fourth generation is needed for Germany to be able to use its strength and power to become an inspiring leader in the world, to co-create a world community which leaves behind ethnocentric behaviors and embraces the human existence as what it is: a unique whole where everyone and everything is connected, where no one can win at the cost of others because it will impact them as well.

We know from psychology that the victims become perpetrators and vice versa – and we see it everywhere. The perpetrator is haunted by what he has done and/or gets victimized by the other side as soon as the situation changes. Permanent winners do not exist; this is an illusion. It is time that we all understand that and therefore work towards a world which doesn’t know “winners”. and “losers”, but only human beings who collaborate to create the best future possible for everyone,

But how can that become possible? The only true answer is: Become yourself a full and grown up human being. That means, first of all, get to know yourself well, on a very deep level. Learn about your hidden motivations, your conditioning and learn to feel fully how your body feels, how your emotions move you, what your unobserved habits are.

What we need to learn

Your thoughts and feelings, what quality and direction do they have?  Are you fearful and suppress the fear instead of feeling it? Do you become aggressive instead? Or do you freeze in the face of fear and challenge?  If you don’t know well your feelings and the consequent thoughts and behavior patterns you have very little chance to meet the problems of life in an adequate manner. You will try to manipulate the world in order to avoid these feelings if you are a private person or the President of the United States. You will be a part of the problem, not of the solution.

The courage to feel

In Berlin, we worked on it in depth, in personal exercises, and in a mega constellation to heal the wounds of the Nazi regime. I had the role of “frozen feelings”, a behavioral and psychological pattern people often adopt to protect themselves in horrible situations – and which allows them to terribly mistreat others as they cannot feel their pain and meet it instead with contempt. During the 2 hour process, I realized I was finally melting, a transformation was taking place.

I hope that this work will liberate the frozen energies in so many of us who are afflicted with the same pattern, knowingly or not. I am sure that 130 people at the conference, doing this incredibly deep healing work, have added a piece to the big puzzle of the liberation of humanity from the everlasting oscillations between conflicts and wars on one side and “helpless hope” toward a different future of peace and harmony.

The freedom to generate the right decisions

If we really want to create peace in the world then the future needs to be built on solid ground where we humans explore deeply our human nature, embracing our inner parts, including the victim and the perpetrator and all the others, and become able to freely decide to choose as opposed to being driven by uncontrollable emotions into destructive behaviors to the detriment of all.