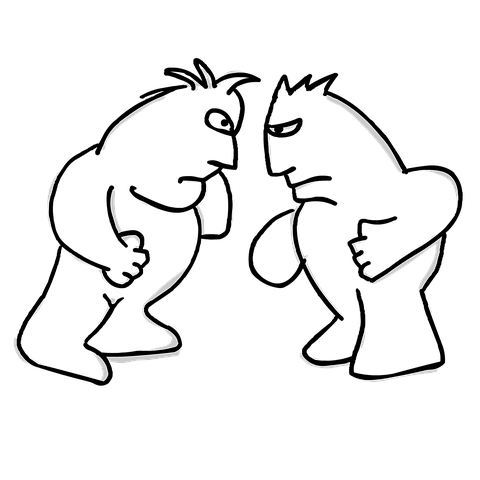 Opposition and fight is useless when we want to bring forth positive development.

Understand me right: I don’t mean that we need to agree with everything which comes our way. Not at all, to the contrary, I would say. Getting in touch with other people’s behaviors and ideas is a perfect occasion for self reflection and for refining our own takes on the matter. And there are probably more things in the world towards which we are skeptical or we totally disagree than those which we happily embrace right away and feel connected to whoever brought them forth.

I am talking here of a completely different case: people who for any reason whatsoever take pride in opposing somebody else’s work. The criticize all or parts of it, the axioms, the ways of reasoning, the worldview or whatever they happen to consider wrong… or they dismiss the whole work of the other person because they believe to have discovered some flaws in it or because of certain assumed or real traits of the originator.

When opposition and critique becomes a personal identity

Today such a case came – again – into my awareness: A person whose name I don’t want to mention here has the habit of criticizing the American philosopher Ken Wilber for more than 15 years. He has created an identity around his opposition to the man and his large body of work. It has become his only viewpoint: something is wrong and I have to point it out. This would not be a problem if the critique was well founded, constructive and benevolent. Instead it turns out as a one sided fight for being heard and for being right – by making the other wrong.

The power of rationalization and projection for avoiding to see our own flaws.

It is a human trait to diminish others in the attempt to raise oneself, not a very healthy one, as we know from psychology, and it sheds light on the personality structure of a person engaged in the fight against his or her windmills. Attack and war to dominate others is as ancient as the need for being right. In integral theory we probably would attribute these attitudes to lower levels of development as we would assume that after integrating rationality into our evolved being we would be able to see also ourselves from a rational perspective. Well, maybe. We certainly see others from our rational perspective, we are able to detect flaws and merits and we are able to develop our own theories as well as we can. But our ability to reflect on others and the outside world is far better developed than our ability of self reflection and self knowledge.

Psychology is a relatively young discipline and the insights we can gain about human conditioning and our own behavioral patterns – which  express our thoughts and our emotions – are not easy to perceive and acknowledge, let alone integrate into our lives. To avoid the confrontation with our own reality we prefer to flee into our rationalizing heads or into the more or less “fake” bliss of spiritual experiences.

The “natural” consequence of the former is to find fault in others (projection of what we don’t want to see in ourselves onto others) or withdrawing from the outside world in the latter. The former leads to separation and war – as if we hadn’t enough of that already. The latter leads to the negation of the responsibility which everyone of us has towards ourselves, humanity and the world.

How being stuck in opposition betrays one’s good intentions.

The paradox, in my eyes, is the fact that many people who “fight” for a better world, for all the good things to happen instead of eternal conflict and war, they themselves are heavily contributing to maintaining animosity and destruction – against their conscious intent. And they don’t even notice it! They don’t realize what they are doing under the headlines of their positive intentions. How can this happen?

Well, first of all, emotional competency and freedom of unconscious patterns has not necessarily to do with levels of development when we consider the cognitive line as main indicator of our level. There are very smart people around with a complex understanding of theories of all kinds – and they might at the same time have not the slightest idea of their collective and personal patterns through which their actions in the world are colored. It is the question of the fish who cannot tell you what water is. It is too near to be in the fish’s awareness!

Coming back to the person who triggered this article. Only he himself can figure out why he is behaving this way, why he spends his life energy in maintaining his opposition and fight to make the other wrong and himself right. I only know that this is not a worthwhile occupation in times when all forces are needed to collaborate for the survival of our species and our planet. It is like wanting to figure out how many angels can dance on the head of a pin while everything around is falling into ashes. In other words: it is not helpful neither for the world nor for the person himself.

Prolonged emotional responses to events in our lives are self consuming and certainly not ultimately rewarding. They are considered disorders, from the psychological point of view. Attachment to victimism might be another term here and blind willingness to seed destruction instead of peace.

It might sound as if I knew it all, as if I had figured that all out for myself and that I take pride in advising others. I am definitely not at that level, but I have come to understand what the missing part is in us humans which, for yet another time, is driving us towards separation, discrimination and hate – and ultimately to war. The threat of total nuclear destruction or by an environmental catastrophe could be right around the corner – and we are contributing to it without being aware of it.

Intergral theory is giving us a good understanding of many aspects of reality. If you want to go deeper listen to the lectures of Dr.Jordan Peterson. He has a very engaging way of leading you into the human predicament – and what you can do to become a better and more helpful person in this world. Check out his channel and especially his message to millenials: How to Change the World — Properly.