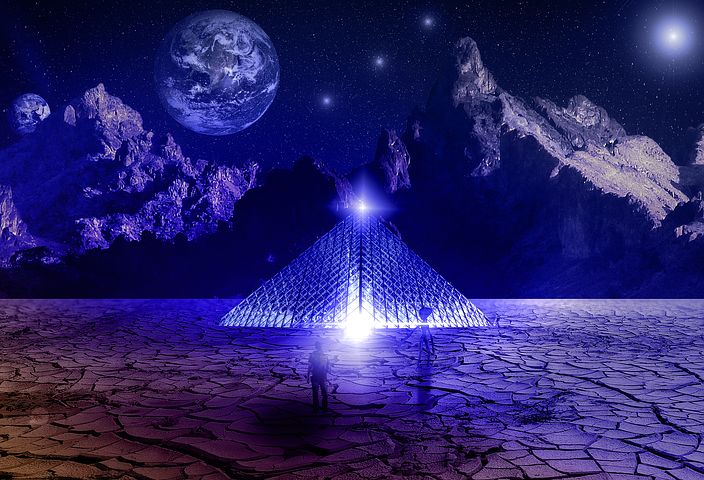 Is that true? Believing vs. Knowing

In the following, I will outline some thoughts about the different ways of judging if something exists or not, if something is “true” or not, and how we can judge about truth and “fake news”.

Hypothesis: Only what you can see exists. True?

Let’s begin with Mathematics. Does it exist? Do you believe it exists, or do you know it? Or do you assume that it exists, for several reasons; maybe because they tried to teach you something with that very name in school and so it must exist! One thing is obvious: you cannot SEE mathematics, you can use it by writing down equations, all sorts of symbols, and miraculously something meaningful comes out at the end – or, if not, you have made some error. So mathematics exists although it is a non-material “thing” which nobody has ever seen, but using its principles leads to interesting insights about what actually does exist in the material world.

So you probably don’t BELIEVE that mathematics exists, you KNOW it.

What about electricity? You cannot see it either, but touching a plug with a wet hand – or, worse, letting your hair dryer fall into your sink filled with water – you certainly have the direct experience of its existence. First, you better BELIEVE the warnings to be careful in similar circumstances and then you will KNOW it for certain as soon as you undergo such an experience or watch it happen to others.

So, do extraterrestrials exist?

Coming back to that question: You probably haven’t seen any yet, but does that mean that they don’t exist? Remember what we have shown with the examples of mathematics and electricity. You might have seen the famous movie “ET” and heard people arguing about the question if aliens really exist or if they are only the purposeful invention of someone or, alternatively, the hallucination of super crazy people who claim to have seen some spaceship appear in the skies. If it is so, you only have the choice to BELIEVE it or not, you cannot KNOW it. You might evaluate how trustworthy the sources of these pieces of information are, but you don’t really have the means of KNOWING as opposed to BELIEVING – or hoping or fearing or whatever.

If you should see yourself these super bright lights which they say accompany spaceships on the sky, would you then BELIEVE it? Or would you think you even KNOW it because you have seen the phenomena with your own eyes? This could well have been the case from the beginning of time until about 60 years ago. But now? Since modern technology is able to fake a spaceship there is much probability that somebody from this planet is trying to deceive you. (If you doubt this statement, get the documentary “Unacknowledged” or start with watching the movie below)

Don’t trust your eyes and what official manipulation wants you to see.

So in the case of extraterrestrials, you cannot use BELIEVE to answer the question but you need to arrive at KNOWING.

How can you arrive at knowing?

That’s easy when you know a little about humans and psychology. From innumerable studies – and from mythological stories like that of Cain and Abel (watch here Jordan Peterson talk about the biblical story of Cain and Abel) – we know that the individual hides everything from others which they don’t want them to know, and he/she envies, attacks and ultimately destroys everything and everyone who embodies their ideal, the thing or the being that they themselves most deeply desire to be or to possess when they realize that they can neither be it nor get it themselves.

Ok, fine. Everybody could talk freely about the topic, nobody would care, it would only serve as a topic for films or a hobby for people who have no better thing to do than observing the sky. But how then could the phenomena be explained? What other explanation would be credible?

But if we assume that technology is able to do similar things, the urgent question arises: How? There is no easily accessible info on the Internet about how flying saucers are constructed and how they work. Does this information exist or not exist? Who is hiding it? And if it doesn’t exist, then the question remains what are these observed phenomena.

So why don’t we all know about it? Why is there such secrecy around it? People who are ridiculed when exposing what they know – or in the worst case, as happened many times, killed? Why would you kill anyone who claims to know how the extraterrestrial spaceships work? Why were so many researchers assassinated who had developed alternative and low-cost (or free) functioning energy sources? Guess who is interested in NOT everyone having access to abundant resources and thriving lives? Well, we know who; those who would lose most when humanity would adopt the alternative energy systems.

Here is the principle which makes clear that ETs must exist:

Something is ever more likely to be true the more someone tries to hide it from the eyes of others.

Coming back to the initial question: Do you believe that ETs exist? Or do you know it?

I cannot speak for you, but the logical deduction tells a clear story: ETs DO exist and they threaten the power of those who were able to gain unimaginable power over us, over the whole world, in the past century. It began with the US military who, by themselves, gathered all available evidence about ET existence – and locked it away in such a way that not even the president or CIA boss is granted access to the documentation. (Watch the below movie for the evidence of what I am saying here)

You might say that this is a conspiracy theory, and you are free to do so, when you BELIEVE it to be the case.  My BELIEF is directed to the credibility of the sources and the documented events and to the “misfortunes” which happened to so many people who seriously researched the topic. I believe in the information I get from people who I personally know as trustworthy or who I have observed for quite a time and have come to the conviction that they are speaking credibly.

AXIOMS are at the base of deduction

That is my basic “axiom” from which I start my logical conclusions. Axioms are those entities which cannot be proved true within the system itself and therefore need to be assumed as true in order to construct a valid and true conclusion from propositions within the system. When axioms change the conclusions change – you might remember the famous Euclidian parallels which never meet, and a completely new geometry arose when this axiom was dropped.

Regarding the existence of ETs in the Kosmos: The other axiom for my deductions is grounded in the laws of human behavior as briefly outlined above: “If you have nothing to hide why do you keep it secret at all costs?” Or better; whenever you use drastic means to keep things secret, these things are real and others knowing about them is highly threatening to you.

For me, aliens do exist and they visit our planet to make sure that our destructivity won’t erase our planet and our species, as well as damage the whole Universe. Our human capacity for endless fighting and destruction for egocentric motives is exemplified in atomic warheads directed not only on locations on this earth but also into space.

We humans are a menace, not only to ourselves but also for whatever might be living in the Kosmos – and NOT the other way round! Despite the fact that psychopathic leaders and those behind the official leadership carousel wanting us to believe in their story. They keep doing this in order to maintain the personal advantage which they draw from the present economic system of scarcity. Fossil energy as the basis of the world economy is not only depriving us humans from the clean air and water which we need for survival, they also keep us in artificial scarcity by means of which they are able to continuously accumulate material wealth.

“Free energy” – the consequence of modern science and alien example

The aliens have mastered the “free energy” challenge and overcome gravity and other basic laws which civilian human science is still struggling with. They use what is presently called “free energy” which has been discovered by many individuals from about 150 years ago on. We all could already live on a clean planet if the main exponents of this KNOWLEDGE hadn’t been eliminated and their documents weren’t hidden. It is useless to hope that the change will come from those who have all the interest in keeping the knowledge hidden. The Internet presently gives us the chance that what has once been discovered can be rediscovered again – and every time it gets easier. (see “Cosmic Grooves” by Ken Wilber). The more that people come out with their ideas and devices and the more it happens in completely publicly, the more it will be difficult to kill all of them and to continue to hide what all humanity has the right to know and use for the benefit of EVERYONE.

There is a movie to watch about this topic bringing many testimonies for the existence of what we have talked about here. The movie is a sort of summary of many hours of footage, much of which published on Youtube and certainly worthwhile to watch – if you need more evidence to get from “believing” to “knowing”

2 thoughts on “Is that true? – Facing the Fake News Society”